A compact and low-cost TOF sensor that changes the definition of long-distance detection.

In general, long-distance detection sensors are large and heavy.
The FASTUS TOF-L Series is a photoelectric sensor with a built-in amplifier that aims to change that characterization. In addition to being the world’s smallest*1 TOF sensor, the TOF-L Series also features a high-sensitivity APD in the light receiving element for high-speed responses of 0.5 ms and maximum detection distances of up to 4.5 m*2.
*1 Among sensors that employ the TOF method. Optex FA examination performed September 2015.
*2 With white paper (90%) 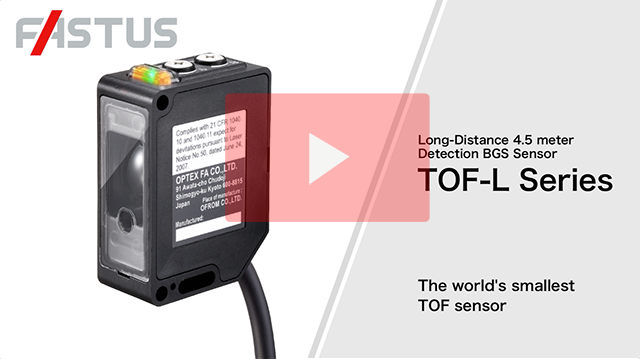 At just 17 × 32.8 × 44.4 (W × D × H) mm, the TOF-L Series photoelectric sensor is the world’s smallest*1 TOF sensor. In addition to measuring only about one-fourth the volume of conventional sensors for significantly more compactness, the TOF-L is capable of long-distance detection at distances up to 4.5 m.
*1 Among sensors that employ the TOF method. Optex FA examination performed September 2015.

Capable of stable detection even over long distances

The TOF-L Series sensor achieves long-distance detections at distances up to 4.5 m while using a Class 1 laser.
This class of laser is also safe on the eyes, so there’s no need for workers to wear eye protection.
In addition, the spot beam is clearly visible, making light axis adjustments easy.